The following image below contains labels with arrows pointing to key Holy places to visit in Lucca which have a connection with St Gemma. You will find a description of each as you scroll down. 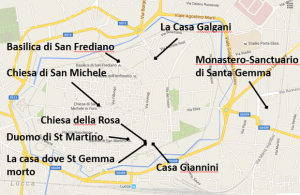 MONASTERO-SANCTUARIO DI SANTA GEMMA
(ST GEMMAS SANCTARY)
The Passionist Monastery in honour of St Gemma gives hospitality to a community of cloistered Passionist nuns. Here you will see a bronze sepulcher, under the altar, where St Gemma is entombed. The remains of St Gemma’s spiritual director, Venerable Padre Germanus Ruoppolo and Gemma’s Confessor, Monsignor Giovanni Volpi are also in the Monastery. Just outside the church there is a little museum with some of St Gemma’s cloths and personal objects. You can also find books about St Gemma, souvenirs, photos, holy cards and statues.

CASA GALGANI
(THE GALGANI’S HOUSE)
The Galgani’s house is located at Via Santa Gemma Galgani 23. This is the house where St Gemma spent her unhappy childhood before moving on to live with the Gianninis. On the first floor of the house is where she conversed with Jesus, the Virgin Mary, the Angels and St Gabriel. It is also where she received the grace of the stigmata. The whole apartment is transformed into small “Santuario-Museum” with a small chapel and preserves the memories and objects Gemma and her family. It is now named “The small sanctuary of the stigmata”.

CHIESA DI SAN MICHELE
(THE CHURCH OF ST. MICHAEL)
This was where St Gemma was confirmed and later she often came here to confess to Mon­signor Volpi.

BASILICA DI SAN FREDIANO
(THE CHURCH OF ST. FREDIANO – “ST. FREDERICK”)
This was the church where St Gemma received her first Holy Communion.

CASA GIANNINI
(THE GIANNINIS HOUSE)
The Gianninis’ house is at Via del seminario, 10. This is the house where St Gemma spent the last four years of her life. It is here where the Saint received the marks of the scourging, the crowning with thorns, tears and sweat of blood. In this house you can also find the great crucifix which embraced Gemma. You can also find the famous “chest of drawers”; the table on which the the Saint wrote the autobiography and many letters. Finally, it is in the garden of this house the well where Gemma threw herself to win a temptation against purity.

The “Sisters of St. Gemma” take care of the Giannini family home. They are a religious community founded by Eufemia Giannini who was Gemma’s favorite of the Giannini children and the confidant of many of her secrets. She was very devoted to Gemma during the time of Gemma’s last illness and she was present at her death. Influenced by Gemma’s heroic virtues, she became a nun, and in 1939 became the Mother of the new Community “The Passionist Sisters of St Gemma”. She took the name Mother Gemma Giannini. She died in 1971, and was officially declared “Venerable” by Pope Benedict XVI on March 15th, 2008.

LA CASA DOVE SANTA GEMMA MORTO
(THE HOUSE WHERE SHE DIED)
This is at Via della Rosa, 29. The flat had been rented by Gemma’s Aunt Elisa Galgani and on January 24th 1903 they had transferred the Saint there, due to concerns of her disease being contagious. The room where she died and which faced the Gianninis’ garden has been turned into a chapel. It re­calls the dreadful devilish vexations she was subjected to during the last months of her life, her painful crucifi­xion, her isolation and her calm and serene death after the agony she had lived together with Jesus.

CHIESA DELLA ROSA
(SANTA MARIA DELLA ROSA CHURCH)
It is located opposite to the house where St Gemma died. The Saint came here very often to pray and attend mass during her stay with the Giannini family and also during her final disease.

LUOGO DI NASCITA DI SANTA GEMMA
(ST GEMMA’S BIRTHPLACE)
Gemma’s birthplace is Borgonuovo, Cappanori about seven kilometers from Lucca. The house where she was born is at Via Pesciatina, 502. Since 1943 the house has been taken care of by the “St. Gemma’s Si­sters”.