“I am happy in every way that Jesus wills, and if Jesus wants the sacrifice of my life, I give it to Him at once. If He wants anything else, I am ready. One thing alone is enough for me; to be his victim, in order to atone for my innumerable sins, and if possible, for those of the whole world” – Saint Gemma Galgani.

Gemma was not a person of half measures. She loved God with all of her being and Jesus was everything to her.

“Can’t you see that as soon as day breaks I think of You? As evening comes I am near You in every moment. I love You Jesus!” – Saint Gemma Galgani. 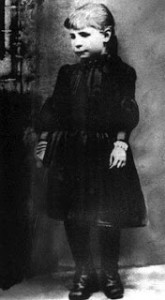 Gemma was born on 12 March 1878 in Camigliano, a village near Lucca in Italy. She was the fifth of seven children. Her father was a chemist called Enrico. Her mother Aurelia did her very best to make her a good Christian. Her Mum would always pick her up and hold her in her arms. She often used to cry and Gemma could never understand why until her mother told her that she was very ill and soon would be going to heaven. When she saw how worried and sad Gemma was she said “One day, if you are able would you come with me to the place to which Jesus is calling me? To Paradise with Jesus and the Angels?”. This invitation filled Gemma with joy! But her mother knew that she could not take Gemma with her to heaven. So she prayed for Gemma’s spiritual future and entrusted her soul to the Holy Spirit. When Gemma was seven years of age she completed her religious instruction in preparation for the Sacrament of Confirmation. This she received on 26 May 1885.

While in church as Gemma was praying for her mother a sudden voice spoke into her heart.

“Are you willing to give me your mother?”
“Yes” Gemma replied, “provided you take me also!”
“No,” said the voice, “give me your mother of your own will. For the present you must remain with your father. I will take you to her in Heaven later.”

Gemma felt she had to say yes, and when the Mass was finished she ran home. Afraid to leave her mothers side, in case she left without her, she would climb up on her mother’s bed, put her arms around her neck, and kiss her. The doctors then suggested that Gemma be kept away from the sick room because her mum had tuberculosis. Finally her father, who feared Gemma would die before her, sent her to stay with her uncle. Four months later Gemma’s mum passed away. It was on 17 September 1885.

In 1887 her father, being a good Catholic, placed Gemma under the care of Sister Elena Guerra at her school run by nuns. Gemma wanted to learn more about Christ’s sufferings and His Passion. Her Mistress, Sister Catherine Vagliensi, began to tell Gemma something everyday, choosing an hour for the recital when the other children were in bed. One evening she described the Crucifixion, the crowning with thorns, and all the other sufferings of Jesus so vividly, that the sorrow and compassion Gemma felt brought on a high fever and she had to remain in bed the whole day after. Every day, Gemma had a part of the Passion explained to her. Often when reflecting on their sins and feelings of ingratitude towards Jesus they began to weep together. Gemma’s first Holy Communion was 17 June 1887.

“I cannot explain in words the feelings I felt when I felt the presence of Jesus so strongly in my soul. I felt completely taken by the desire to be forever united with my God. I wanted to make some good resolutions, to always be faithful to Communion and to Confession. To visit Jesus in the Holy Sacrament and to always be in God’s presence. To ask every day the Heavenly Mother for her blessing”– Saint Gemma Galgani.

On Thursday 8 June 1899, Jesus told Gemma that an unusual grace was to be granted to her. In the evening Gemma felt an intense sorrow for her sins. She fell into a state of rapture and found herself in the presence of her Heavenly Mother and her Guardian Angel. Covering Gemma with her mantle her Heavenly Mother said

“My Son Jesus loves thee beyond measure, and wishes to give thee a grace.”

At that moment Jesus appeared, the wounds from His Passion issuing flames of fire. As those flames came to touch her hands, feet and heart Gemma felt as if she were dying. Gemma would have fallen to the ground had her Heavenly Mother not held me up. All that time Gemma remained beneath her mantle. Once the vision was over Gemma felt a tremendous pain in her hands and feet and realised that blood was flowing freely from them. That pain and that sorrow, instead of distressing her, gave her perfect peace.

In 1902 Gemma offered herself to God as a victim for the salvation of sinners. 21 September 1902 she fell dangerously ill with tuberculosis. Gemma died on 11 April 1903 on Holy Saturday.

“I seek for nothing more. I have made the sacrifice of everything and of everyone to God. Now I prepare to die. Now it is indeed true that nothing more remains to me. Jesus, I commend my poor soul to Thee” – St Gemma Galgani.

Gemma Galgani was canonized by Pope Pius XII on 2 May 1940.

This is only an introduction. For everything you need to know about St Gemma Galgani including her extensive autobiography, writings, quotes, articles along with official photographs and numerous examples of her heroic life please visit: www.stgemmagalgani.com/ 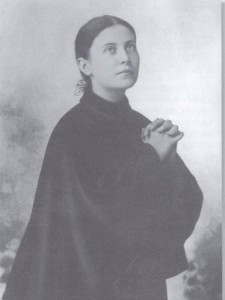 “You know, oh Jesus how I am to sacrifice myself in everything. I will bear every sort of pain for Thee!”